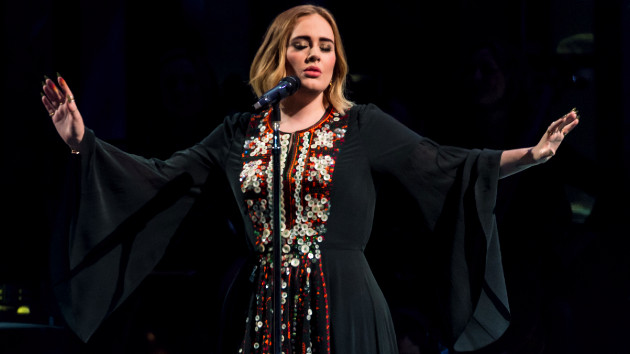 Ian Gavan/Getty ImagesAdele had on the best possible outfit when the BBC re-aired the 2016 Glastonbury festival, of which she was the headliner.  She dusted off the same silk Chloé dress she rocked on stage and had herself a fun photoshoot.

Because COVID-19 forced the cancellation of this year’s Glastonbury festival, the BBC opted to re-air past performances.

As for what inspired the 32-year-old to go rummaging through memory lane on Saturday, she credits it to being “5 ciders in” by the time her performance aired on TV.

The “Rolling in the Deep” singer uploaded two photos of her watching the television program to show what she looked like before and after she jumped into her old costume.

In the hilarious series of snaps, Adele started out watching the broadcast in comfy looking gray sweats and an oversized white tee.  She is seen squatting by the television and making a funny face while cooling herself with a portable electric fan.

The next photo shows her dancing wildly — and in a blur — while wearing the gorgeous hand-embroidered dress.

Chloé previously revealed on Facebook that the gown, a “silk georgette dress in deep green,” took over 200 hours to complete.

Prior to her donning her old dress, Adele also uploaded a throwback shot from her 2016 performance and captioned it with a cheerful smiling emoji.

An eager fan managed to elicit the “Hello” singer’s attention by begging, “Teaser?  Albums coming out today???!!!! Tell me now!!!!”

Adele, whose upcoming album has been delayed due to the ongoing COVID-19 pandemic, set the record straight by responding with a frank “of course it’s not.  Corona ain’t over.  I’m quarantining.  Wear a mask and be patient.”

The album, her first since 2015’s 25, was originally anticipated to drop in September.