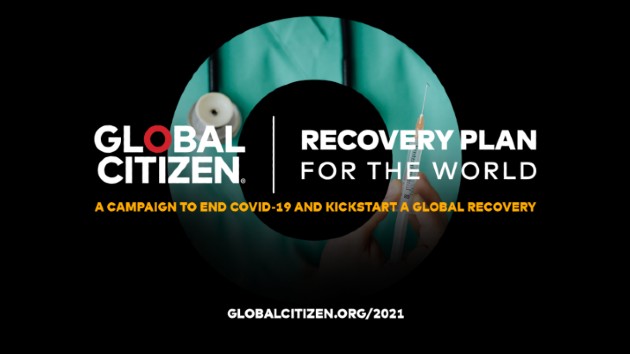 Courtesy Global CitizenLast year, Lady Gaga teamed with Global Citizen to put on the One World: Together at Home event, which raised nearly $128 million for frontline healthcare workers.  Now, Global Citizen is doubling down with another campaign that’s equally star-studded.

What are the goals of the campaign?  Oh, nothing much — just ending COVID-19 permanently, solving the hunger crisis, resuming learning worldwide, protecting the planet and “advancing equity for all.”

As for how these artists will be involved, part of the campaign includes a global broadcast special airing in May, and the annual Global Citizen Live concert in September. It’s a good bet that many of these stars will be involved in one or both of those events.

The broadcast special will encourage governments to make sure vaccines are distributed equitably, while Global Citizen Live, scheduled for September 25, will feature performances from all over the world, from Lagos and New York City to Paris, Seoul and Sydney.

In a statement, Priyanka Chopra Jonas, Nick Jonas‘ wife, says, “By using our voices to call on world leaders, corporations and philanthropists to step up and take urgent action, and by supporting the ‘Recovery Plan for the World’, we can impact millions of lives for the better now, not later.”

She adds, “Global Citizen’s plan provides a clear path forward to ensure that we get children back in classrooms, food back on the table for families, and get vaccines, tests and treatments to everyone, everywhere.”