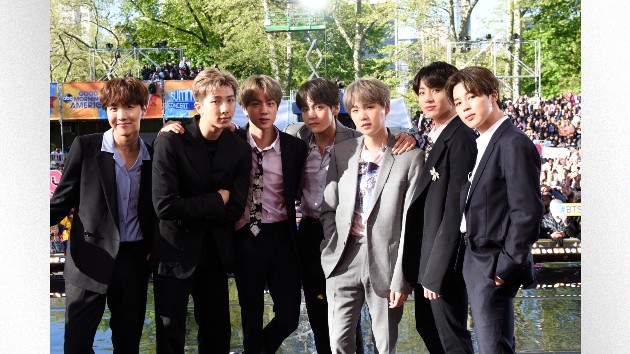 Walt Disney Television/Paula LoboJust under 3,700 people — some of whom had been camped out for days — crammed themselves into Rumsey Playfield in New York City’s Central Park Wednesday morning to watch K-pop superstars BTS kick off Good Morning America‘s Summer Concert Series.

The group’s appearance on the ABC show was the #1 trending topic worldwide on Twitter and they didn’t disappoint, whipping fans into a frenzy with performances of “Fire” and “Boy with Luv.”

When ABC’s Michael Strahan and Robin Roberts asked BTS about being the first group since The Beatles to score three #1 albums in a year, they were suitably humble.

“We’re all fanboys of [the] Beatles, of course. I mean, who is not?” said BTS member RM. “We feel so honored to be with the greatest names in [the] music industry.”

Explaining what “Boy with Luv” is about, RM said, “It’s about finding…joy in love and being curious about the little things: the details of what you’re eating, what you’re doing…but most importantly, ‘Boy with Luv’ is like a fan letter from BTS to our Army.”

That, of course, set the crowd screaming again.