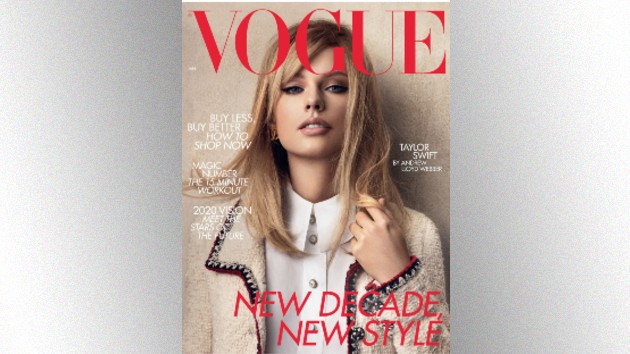 Craig McDean for British VogueTaylor Swift covers the December issue of British Vogue, in which she talks with CATS creator Andrew Lloyd Webber.  Taylor, of course, is one of the stars of the upcoming movie version of the musical, and she and Lloyd Webber co-wrote a new song for the soundtrack.

Taylor says she approached the recording of Lover as a live performance, explaining, “I was really singing a lot at that point — I’d just come from a stadium tour, and then did CATS, which was all based on live performances.”

“When you perform live, you’re narrating and you’re getting into the story and you’re making faces that are ugly and you’re putting a different meaning on a song every time you perform it,” she adds.

When Lloyd Webber asks her if that makes her want to be an actress, Taylor replies, “I have no idea…I really had an amazing time with CATS. I think I loved the weirdness of it. I loved how I felt I’d never get another opportunity to be like this in my life.”

Taylor also tells a cute story about one of her co-stars, Judi Dench.

“Someone walked up to me with this kind of gummy candy and I was like, ‘Oh, I’ve never had this before, this must be British candy, this is amazing,’” she recalls. “I was raving about this candy so much, and Judi must have overheard me, because the next day I got to my dressing room and there was a signed photo from Judi and, like, six bags of it.”

On British Vogue‘s cover, Taylor wears an archive Chanel tweed jacket from the house’s 2005/2006 collection, which editor-in-chief Edward Enninful explains is an attempt to “contribute to the conversation around sustainability…[by] buying better and buying less.”