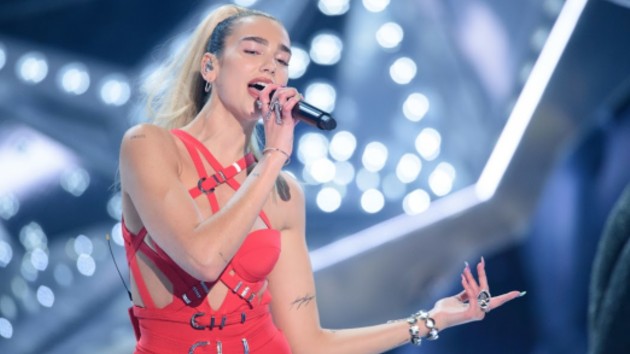 ABC/Image Group LANo word on a release date, but at least we now have the title of Dua Lipa‘s new album.  It’s called Future Nostalgia and it’ll be out sometime in 2020.

Dua first revealed the album’s title on Instagram; she has it tattooed on her arm.

In a statement, she says, “What I wanted to do with this album was to break out of my comfort zone and challenge myself to make music that felt like it could sit alongside some of my favorite classic pop songs, whilst still feeling fresh and uniquely mine.”

Noting that her inspirations on the album include Gwen Stefani, Madonna, Blondie and Outkast, Dua explains, “Because of the time that I’d spent on the road touring with my band I wanted Future Nostalgia to have a lot more of a live element, but mixed together with modern electronic production.”

Explaining the title, Dua reveals, “I realized that what I wanted to make was something that felt nostalgic but had something fresh and futuristic about it too.”

The Grammy-winning star will kick off a European arena tour April 26 in Madrid, Spain; it’s currently set to wrap in Dubin, Ireland on June 19.  No word so far on any U.S. tour dates.

All tickets will include an added charity donation that will go to both UNICEF and Sunny Hill Foundation.  Dua and her dad set up the latter charity to help the citizens of Kosovo, where her parents are from and where she lived for a time as a child.