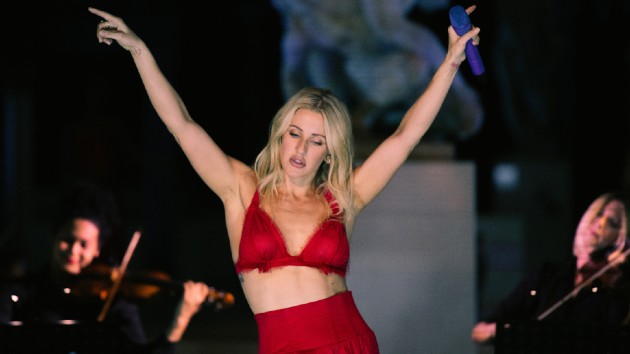 Jennifer McCord via Getty ImagesSurprise! Ellie Goulding and her husband Caspar Jopling are expecting a baby, the singer reveals to Vogue.

Wearing an old-fashioned dress, the singer shows off her baby bump in photos in the publication, adding that she’s 30 weeks along.  She notes that she was actually pregnant during her last public appearance — a concert at London’s Victoria & Albert Museum in August — but didn’t know it.

Ellie says she and Caspar found out the good news on their one-year anniversary, and it was a surprise.

“That was not the plan. The thought of getting pregnant didn’t seem like it could be a reality,” she explains. “Becoming pregnant kind of made me feel human. I want a better word than ‘womanly,’ [but]—I have curves I’ve never had before. I’m enjoying it. My husband’s enjoying it.”

But, the health-conscious singer laughs, “I started having a completely different body and different energy…I actually went from being smug about how healthy my salads were and my breakfasts and eating nuts and seeds, and then all I wanted was McDonald’s.”

“I was kind of terrified,” she admits. “I suddenly wanted all of the bad things! Whatever this baby did when it took over my body was like, ‘Hell no—I do not want broccoli, spinach, collards! I just wanted sugar and carbs.’”

Ellie admits that being pregnant during a pandemic is somewhat lonely and isolating, adding, “I have a newfound respect for any woman who has children.”

With a wellness book called Fitter. Calmer. Stronger. coming in September, Ellie says she’s “excited” about being a mom, but will continue to work.

“I can’t wait to go back on tour. I’ve been in the studio most days, [and] I’m excited for the challenge,” she says. “It will be a totally new experience.”