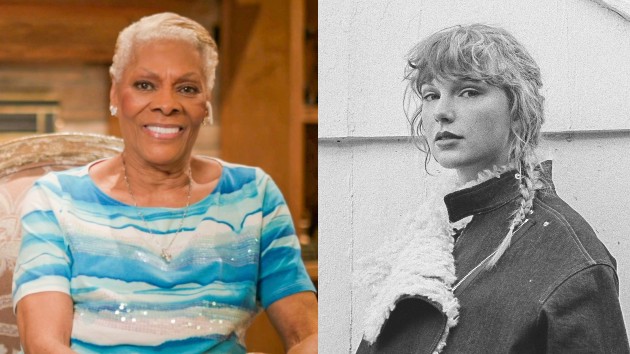 Dionne: Getty Images/Getty Images for Children’s Diabetes Foundation; Taylor: Beth GarrabrantTaylor Swift has just accomplished something that only country icon and American treasure Dolly Parton has managed to do before: Hit number-one twice with two different versions of the same song.

As Billboard reports, “Love Story (Taylor’s Version),” the re-recorded version of Taylor’s 2008 hit, has debuted at number-one on the publication’s Hot Country Songs chart.  It’s her first number-one debut on this chart, and her eighth number-one on the chart overall.

But this also marks the second time that “Love Story” has been number one on this chart.  The first time was, of course, in 2008, when “Love Story” was first released, and Taylor was a huge country star.  The only other time this has happened is with Dolly Parton’s classic song “I Will Always Love You.”

The original version of Dolly’s song was number-one on the Hot Country Songs chart in 1974, and then again in 1982, in a new version Dolly recorded for the soundtrack of her movie The Best Little Whorehouse in Texas.

In a statement, Taylor tells Billboard, “This is my first time having a No. 1 debut on the Billboard Hot Country Songs chart and I’m so grateful to the fans for making this a possibility. They’re the ones who emboldened me to reclaim my music and they really showed up this week to see it through.”

“It blows me away that they’ve sent a song to No. 1 that had its first life over a decade ago,” she adds. “I couldn’t be happier that it happened now, and in this way.”

Taylor’s re-recording is also being played on pop radio stations.