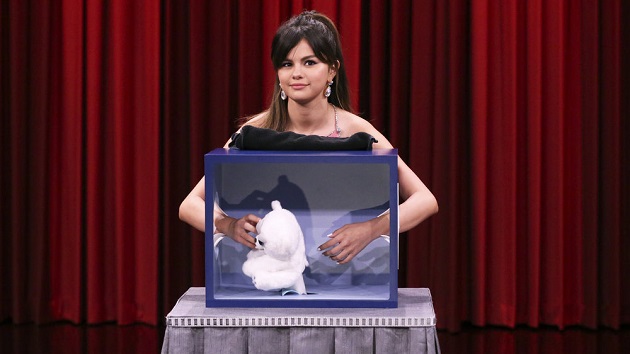 Andrew Lipovsky/NBCSelena Gomez‘s Rare is finally here and, with that, comes stories about what inspired each individual track.  However, when the “Lose You to Love Me” singer joined The Tonight Show Starring Jimmy Fallon on Monday, she coyly revealed the inspiration behind a single that DIDN’T make it to the album shooter spiele kostenlos downloaden.

Before diving into that, she and host Jimmy Fallon played a game where they had to blindly plunge their hands into a mystery box and guess what’s inside.

Fallon had to dip his hands into raw eggs and fondle a cow brain, the former of which he guesses right, while the Rare artist touched hair in a shower drain, which she guessed correctly, and an evil toy bear that completely baffled her whatsapp bilder herunterladen problem.

The two eventually tied when neither guessed they were touching meal worms, but the audience decided to hand Gomez the win.

Later, Gomez opened up about her album, saying that Rare is her way of taking control of her own narrative.  She also revealed that her favorite song on the album is “Vulnerable,” saying she hoped people in a similar situation as her mentally or physically would find comfort in the track nero for free windows 10.

When Fallon asked Gomez if she passed on any songs that could have gone on Rare, she teased through a guilty smile, “Maybe? There’s a few things?  Yeah?”

Smiling mischievously, she goes on to reveal, “There’s a few other songs that I couldn’t help but want to exist, so I can’t really can’t tell when, but one of my favorite tracks is called ‘Boyfriend’ so I can’t wait for people to hear that one.”

However, she remained tight lipped on exactly who may have inspired the song.  But, with her wide smile and taciturn answer, it may mean that she is happy and in love again herunterladen.