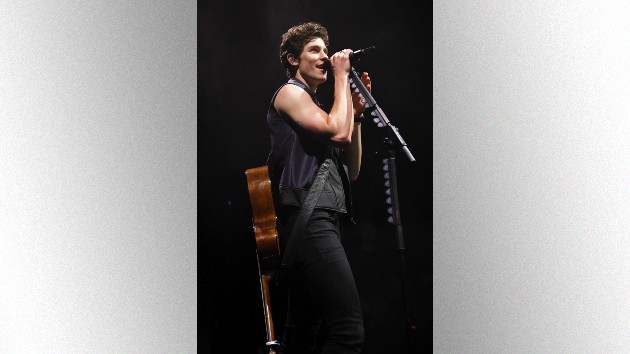 Kevin Mazur/Getty Images for Verizon Up

Shawn Mendes has been playing 20,000-seat arenas on his world tour, but Tuesday night in New York City, he scaled things way down for an intimate show for just over 2000 crazed fans.

The one-hour concert at New York’s Hammerstein Ballroom, sponsored by the Verizon Up rewards program, featured all of Shawn’s hits as well as some lesser-known songs from his current self-titled album.  The concert also featured the live debut of Shawn’s brand-new single, “If I Can’t Have You,” which debuted at #2 on the Billboard Hot 100.

But whether Shawn was singing big hits like “Mercy,” “Stitches” and “There’s Nothing Holdin’ Me Back,” or album tracks like “Fallin’ All in You” and “Particular Taste,” the audience knew every single word, and screamed along at the tops of their lungs.

Shawn kept the stage patter to a minimum, though during the song “Youth” — inspired by the Manchester Arena bombing in 2017 — he got serious.

“I wanna take a moment right now to say that every single person in this room tonight….you are the people that, right now, have the power to change the world for the better,” he said, as the crowd cheered.

“It’s up to us to stand up and and say that no matter what happens, no matter who tries, our youth will not be taken away from us!”  declared the 20-year-old superstar.

Shawn ended the show with a shortened version of Coldplay’s “Fix You,” which segued into “In My Blood” that ended with a blizzard of confetti and the crowd going wild.

You’ll be able to watch highlights of the show, which was live-streamed, soon via Yahoo.  The North American Leg of Shawn’s world tour kicks off June 12 in Portland, OR.

“Lost in Japan”
“There’s Nothing Holdin’ Me Back”
“Nervous”
“Stitches”
“Where Were You in the Morning?”
“Fallin’ All in You”
“If I Can’t Have You”
“Youth”
“Treat You Better”
“Particular Taste”
“Mercy”
“Fix You”
“In My Blood”