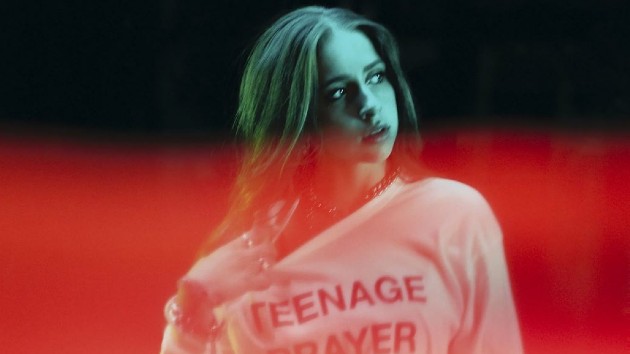 Amy GardnerTate McRae officially has her first Top 40 hit on the Billboard Hot 100 with “You Broke Me First,” and she’s also number-one on Billboard‘s Emerging Artists chart.  While the song finds Tate blasting her ex for trying to get back with her after he dumped her, she admits that she wasn’t experiencing any of those emotions when she wrote the tune.

“My mind is like always racing a mile a minute. I literally just get in there and freestyle, y’know, see whatever comes out and what’s on the top of my head,” she says of her songwriting process. “And ‘You Broke Me First’ was just something that I thought was a really cool line that kinda just came out of nowhere.”

“I don’t even I don’t know where it came from, because I clearly, like, I wasn’t heartbroken!” she laughs. “I wasn’t super-upset. But it was just kind of sitting there and it just turned into a song.”

Now that “You Broke Me First” is becoming a hit on the radio — reaching the top 20 of Billboard’s Pop Airplay chart — it’s likely introducing a whole bunch of listeners to Tate for what’s probably the first time.  She says she’s happy that it’s this particular song that’s her big breakthrough.

“Honestly, it makes me so happy. This song was just written with me and this girl and then a producer in the room,” she says of “You Broke Me.

“It was a very simple…just very genuine songwriting session,” she notes. “So that makes me so happy to think that songs that are so personal to me…are connecting and able to reach, like, globally…which is cool.”