'The Voice' recap: three artists advance, and three more sing for the last spot in the finale 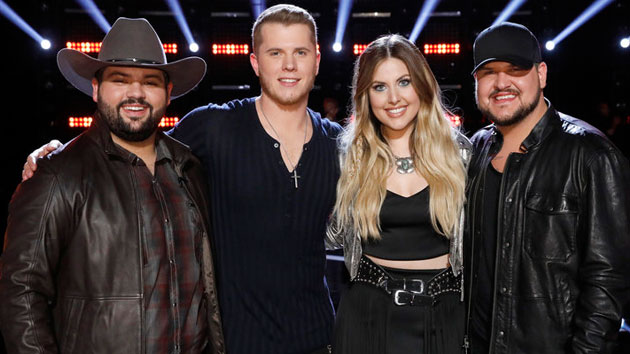 L-R: “The Voice” finalists Andrew Sevener, Gyth Rigdon, Maelyn Jarmon and Dexter Roberts; Trae Patton/NBCOn Tuesday night’s The Voice, host Carson Daly revealed who among the eight semifinalists will be advancing to next week’s finale, based on America’s vote.

Three of the top eight artists were voted through by viewers, the two bottom vote-getters were eliminated, and the remaining three sang for an “Instant Save.”

Heading into Tuesday night, coach Blake Shelton still had five artists in competition, John Legend had two artists, Kelly Clarkson had one, and Adam Levine had none.

At the top of the show, Blake Shelton performed his latest single, “God’s Country.”

The top eight then joined Carson onstage to announce, in no particular order, the first artist to advance to the finale. It was Team Legend’s Maelyn Jarmon, who shared a hug with her coach.

The next artist saved was Team Blake’s Dexter Roberts, who looked genuinely surprised, despite his string of powerhouse performances.

Next, Kelly Clarkson performed a duet of Bob Seger and Martina McBride‘s “Chances Are” with her team member, Rod Stokes.

Then came the battle for the Instant Save. Carson announced the three artists who would perform for the right to advance to the finale, voted on by fans on Twitter. Those artists were Andrew Sevener, Rod Stokes and Shawn Sounds, meaning team Blake members Kim Cherry and Carter Lloyd Horne were eliminated.

Each of the remaining artists chose their song to perform.

Andrew chose “Simple Man” by Lynyrd Skynyrd, a song Blake said afterward he wished Andrew would have saved for the finale. While Blake was confident that Andrew would advance, he promised Andrew it wouldn’t be the end of the road. “If you go home tonight, I want you to go ahead and start packing your bags to come play my venues” said Blake, gladly offering to book Andrew at any of Blake’s Ole Red bars.

Rod sang NEEDTOBREATHE‘s “Brother.”  After his performance Kelly was wrapped in emotion, saying Rod had the kind of voice she had been dying to sing with her whole life. She joked that before the show Blake jinxed her, predicting she was going to cry, and the jinx worked. Halting her tears, Kelly told Rod that he and his fiancé were terrific people and that Rod had a classic voice that could sing anything from Chris Stapleton to Michael McDonald to Ray Charles.

Rod was moved by the praise from his coach, saying that singing with Kelly was a goal accomplished.

Shawn Sounds was last, choosing a more upbeat number: “That’s What I Like,” by Bruno Mars. Afterward, John said he felt fortunate to work with someone as musically gifted as Shawn, praising his confidence and hard work during their rehearsals.

But when the results were in, it was Andrew Sevener who won the Instant Save, meaning Shawn and Rod were heading home.

Next week, The Jonas Brothers and Taylor Swift with Brandon Urie are scheduled to perform for the two night, live Voice finale.

Part one of The Voice finale begins Monday at 8 p.m. ET on NBC.